Dance like nobody's watching, or while everybody is watching...

This video of the dancing 2 yr old proves how great kids are. Do you remember what it was like to be so so sure that whatever you were doing was the right thing to do?

My mom tells a story of me as a little 3 year old, dining with my fam, at a Mexican restaurant, in Chico, CA. The restaurant had a musician and I decided to ask the guy if he knew the song "Kokomo" (Bermuda, Bahama, coooome on, pretty mama...) He told me he didn't. Of course, he actually did, but at 3, I had not yet mastered lies, sarcasm, and all those other adult games.
So, when he asked if I would sing it for him, I happily obliged. I believe I sang and danced while he "magically" played, the song he had never heard, on his guitar.
Point being- how great is it to be a kid?! I would never, ever, ever, ever, ever, eeevveeeer get up in a restaurant now and sing a song- even if it was "Happy Birthday".
But, maybe some time this week, take a moment and be a kid again- act silly, be confident, strut your stuff, and own it.

Happy Monday.
Posted by Unknown at 9:22 PM No comments:

A friend sent me this rad article today. If you grew up in the 90's, you must read it. Yes, I am telling you what to do.

This is a cop-out of a post, but... group presentation, graduation final paper, big scary exam and surprise COLD (!!!) have got in the way.

I'm sure you are all just as busy, so take a moment to re-live your youth and then run to the store to find gel pens...gosh I loved those. Even though I KNEW they were sub par because the ink would go from nothing to too much so sporadically..they were so cool!

And while I'm reminiscing, does anyone remember dunkaroos? The bf and I randomally mentioned those the other day. I loved them. 1. because frosting and a cookie type item are a magical combination 2. I don't remember my parents ever buying them, which means I 1. had them at friends houses 2. begged my grandma to buy them. Stuff that you don't get on a regular basis is so much better. :)
Posted by Unknown at 5:07 PM No comments:

To vote or not to vote

I have pretty strong memories of being in elementary school and having a mock vote during a presidential election. What I remember more than anything are these two things: 1. hearing that a person's voting choice is an extremely personal choice that can be kept a secret 2. being so jealous of grown ups who got to really vote (and eat ice cream any time they wanted).

1. I think a person's voting selection is a lot less secretive than it was a generation or two ago. Many people are more than willing to share their picks for commander in chief and some go so far as to sport bumper stickers, facebook statuses and over priced t-shirts that let everyone know "hey, I like that guy!" 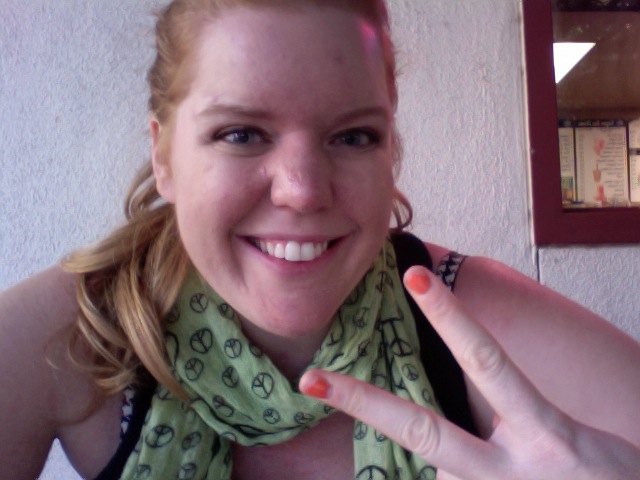 Even if you don't outwardly say who you vote for, people might be able to guess. Our clothes, hobbies, personal values and career choice often say a lot about what we like and who we stand for.
And yet, I think I would like to live in a time when people had no idea who their neighbors, co-workers, kids or spouses were voting for. The conversations leading up to the election are always heated, and sometimes stimulating. And maybe without knowledge of who someone votes for we would have less of that.
I can proudly say that two of my bffs are republicans and we some how find a way to love each other just as much as if we all agreed on what puppet should run our country. Perhaps, I love them even more because I know their friendships are worth disagreeing on some fundamental issues.
Nevertheless, what would this whole election season be like if we didn't wear our political party hearts on our sleeves?

2. Elementary school went by in a hurry and before I knew it, I could vote. The fantasy became a reality and with that came a bitter taste adults get about a lot of things that had once seemed so sweet. Realistically, voting isn't what I thought it would be all those years ago. For one, I live in California, a state that is so blue, my itty bitty ballot has almost zero say in who gets elected. Then there are those annoying ads that play for months, "Yes on 30" "32 is bad" "Wait, someone thinks 32 is good!" The facts are so challenging to decipher that it's easier to play ignorant and change the channel to The Voice, where the voting seems a lot more personal. And while there is something sad about that, it's true.
Everyone, and I mean everyone seems to spend the days and weeks leading up to the election preaching, "I don't care which way you vote, but just do it." Their words seem to say, even though you're not on my side, make your voice heard.
Well, I'm taking a more controversial approach, "whatever you want to do: vote or not, do it." I don't disagree with voting and I do think it's a powerful right that many people will never know. But, the system is less than perfect and Americans are jaded.
If you've never voted, I would argue you might as well do it once and see how you feel about it. You can't say you hate brussel sprouts until you've put one in your mouth and spit it out (and if that happens, try them again with caramelized onions and bacon). But, if you have voted and you feel unsure about doing it again, or if you have no clue what any of those people stand for, you don't have to.
Because in America, we believe in freedom. As a member of the 50 states, you have the freedom to stay at home, watch the election coverage, and wonder if your fellow citizens helped to make a wise decision, even if you stayed out of it. Or, sit back and watch the final season of Jersey Shore. It's supposed to be epic...or something like that.
Posted by Unknown at 3:35 PM No comments:

In case you're wondering (and you should be) upcycling is not cycling uphill. If you need more confirmation on that, speak to Lance Armstrong. He could probably give you a tip on performance enhancing drugs, too.

Upcycling is the act of not only recycling something, but re-using it to make something more useful/beautiful/creative than it would be if the materials were broken down and simply recycled.

Here is an example of upcycling: http://www.etsy.com/listing/111535173/peets-coffee-french-roast-purse?utm_source=googleproduct&utm_medium=syndication&utm_campaign=GPS&gclid=CNq3gbOjp7MCFQtxQgod9yEAbw

My mom bought me a bag similar to this, because she knows I am her planet Earth loving child, and I now use it to hold all my make-up, which is double good because the bag is easy to clean when I inevitably spill eyeshadow, foundation, or lip gloss inside the bag. (Me=problem child)

An even cooler example of upcycling is this chair. A friend of mine referenced me the link and I'm obsessed with how unique this chair is. That is cardboard...cardboard, people! Sheer brilliance.
I would like to say now that there is NO way I could ever make this chair. If you watch the video, you can tell that this guy knows a thing or two about physics and engineering- two things I know nothing about. I could, however, sit in the chair and help someone work through their feelings about upcycling, but that's about it.
In any case, one of the coolest things about the planet is that it's filled with a myriad of people and creativity that one never thought possible. Keep the planet going by supporting this cool chair, and other upcycling projects like it.

Happy Monday.
Posted by Unknown at 3:38 PM No comments: 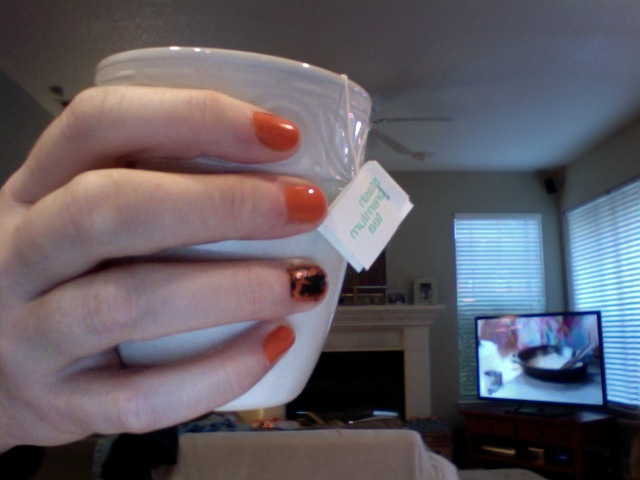 So, I got creative and did my own nails. I spent $1.54 on this rad orange nail polish. I had the black crackle, base coat and top coat in my ecclectic polish supply at home.

Doing one rogue nail is on trend right now and being that I never graduated from 8th grade, I must do what is trendy. Plus, crackle nail polish has an annoying, gummy consistency and it actually worked to my patience's advantage to do one nail.

P.S. I am drinking green tea in this pic (green tea=happiness) and Pioneer Woman's cooking show is on in the background. She was making a peanut butter oreo cream pie, if you really want to get into what's important.

I left my finger on the shift button too long when I typed two of the words in the title of this post. Since both the words started with "M", both the mistaken capital "O"s, and because I am a little bit rebellious/a little bit OCD, I decided to leave it.
That's called being different.

I heard this song on the radio today, after about 3 years of not hearing it. Some times the radio can make me so mad. But, you already know that, as I complained about it's repetitive, "stab me in the eyeball" nature, a couple blogs ago.
In any case, some times the radio redeems itself. It certainly did today and I thought I'd share the tune that made me feel that way.
The song itself is sweet, and the video is even more cute, plus a little funny. It's cunny, if you will.

"Little Moments"
Posted by Unknown at 3:33 PM No comments:

Long Distance Relationships are not a big dose of happy.

But, Caitlyn making a video about them?

A big plate of happy. With a side of funny, and hilarious al a mode for dessert.

HERE is my talented, tall, crazy and strong (strong because she's weathering through an LDR, not because she can lift a school bus over her head...maybe she can do that, too?) friend, doing what she does best.